The KMA is pleased to present two sculptures by the Spanish artist Manolo Valdés, Caballero and Butterflies. Valdés' work engages with the legacy of the Old Masters—in particular, Francisco de Goya, Diego Velázquez, and other towering figures of Spanish art history. Caballero, for instance, alludes to Velázquez's equestrian portrait of Phillip IV, but transforms the original painting's central figure into a three-dimensional bronze sculpture. Butterflies also takes inspiration from the history of painting, in this case Henri Matisse's Woman with a Hat. As Valdés has reflected, “I am just a narrator who comments on the history of painting in various ways, using new materials: it is like a game that consists of changing the code and the key to the artwork…. Many of my colours, materials and textures are the product of relived experiences of other masters.”

Manolo Valdés is a Spanish artist known for his unique method of drawing from art history to create his paintings, prints, and sculptures in a signature style of pared-down forms and unrefined mark-making. Valdés uses art as a channel of self-expression. He portrays the political and social obligations of the state with humor and irony. 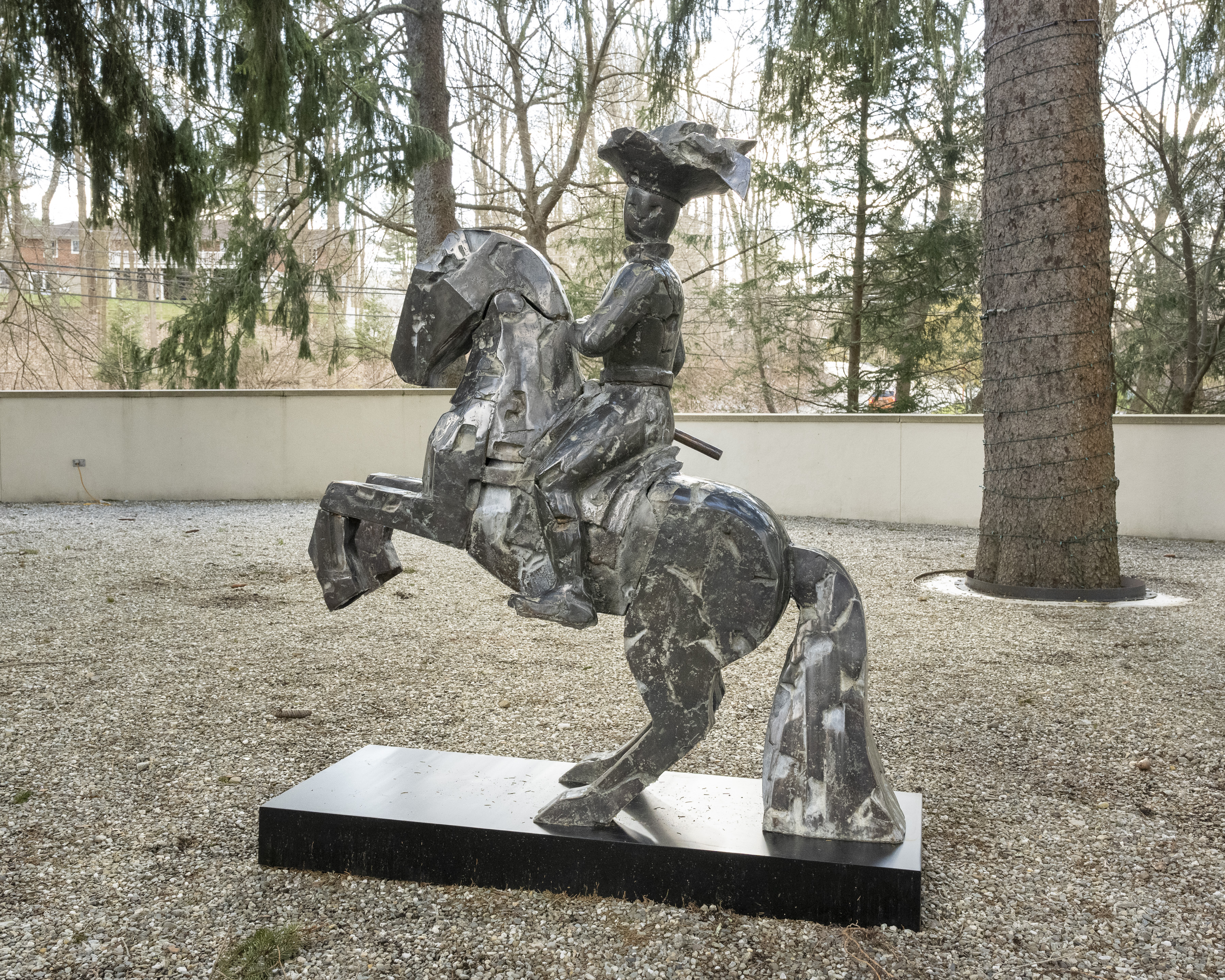 Born on March 8, 1942 in Valencia, Spain, the artist attended the San Carlos Academy of Fine Arts but left before graduating to start his career. Along with Juan Antonio Toledo and Rafael Solbes, and under the dictatorship of the Franco regime, he formed the influential Spanish group Equipo Crónica in 1964, an offshoot of the Pop Art movement with the focus of creating work imbued with political critique which challenged the Spanish dictatorship of Franco and the History of Art itself.. “[To] us Pop was a means to engage in a political battle,” Valdés explained. “But also a way out and against the domineering artistic tendencies associated with Informel.” Toledo left the group after a year, but Valdés and Solbes continue their collaboration until the latter’s death in 1981. In 2016, Marlborough Gallery organized a public exhibition of six massive sculptures at the Place Vendôme in Paris.

His large scale paintings, sculptures and mixed media works are an open dialogue in reference to the masters of Art History. Valdés’ bronze sculptures which are inspired particularly by Velázquez, are especially prominent. Valdés’ expressive style is characterized by the incorporation of various materials in his artworks, paying attention to the surface texture and the use of tactile materials. In his paintings, oil is applied in thick layers and other materials such as twine, jute canvas, bitumen, and linseed oil, adhesives of all kinds and a wide range of natural pigments are incorporated.

Valdés has received numerous awards, including the Lissone and Biella in Milan in 1965; the silver medal in the second International Prints Biennial in Tokyo; an award from the Bridgestone Art Museum in Lisbon; the Alfons Roig Award in Valencia; the National Award for Plastic Arts in Spain, the Medal of the Order of Andrés Bello in Venezuela. He has had numerous solo and group shows internationally in galleries and museums alike and his work is part of prestigious private and public collections, notably the de Young Museum of San Francisco; the Peggy Guggenheim Collection, Venice, Italy; the Hamburger Kunsthalle, Hamburg, Germany; the Menil Foundation, Houston, Texas; the Metropolitan Museum of Art, New York; the Modern Museet Art, Stockholm, Sweden;the  Musée National d'Art Moderne, Centre Georges Pompidou, Paris, France; the Museo Nacional Centre de Arte Reina Sofía, Madrid, Spain; the Museum of Fine Arts, Houston, Texas and the Museum of Fine Arts, Boston, Massachusetts just to name a few. Manolo's iconic sculptures are exhibited outdoors in the parks and gardens of major cities such as the New York Botanical Gardens, Hofgarten, Dusseldorf and Chatsworth House, UK.

He currently lives and works between New York, NY and Madrid, Spain. Valdés’s works are held in the collections of the Metropolitan Museum of Art in New York, the Guggenheim Bilbao, and the de Young Museum in San Francisco, among others.